Now that the summer has become a distant memory (although I’m not sure I can remember many days that actually qualify as ‘summer’) I’m posting the first of a series of images taken during a short break down in Kent during August.  Actually, each day was a tense battle between the weather gods and became a challenge to avoid threatening downpours.

Dungeness beckoned, I had a vague idea that this headland might present itself as a photographically interesting location – it’s somewhere with a long list of conservation designations, nature reserve status, RSPB bird sanctuary, and one of the largest expanses of shingle in Europe.  The long drive in required determination, however. The head wind was such that the car broke all records for fuel consumption.  There were no birds to be seen as they clung to the ground (trees are sparse around here).  Not helped by the storm force winds and black skies that were threatening imminent thunderous downpours, the entire area was just bleak and uninviting. We sat in the carpark, looking at the expanse of nothingness towards the sea and the dark monolithic structure of a large nuclear power station behind wondering why we had come all this way.

Surely there was nothing out in that threatening desolate wasteland worth photographing? 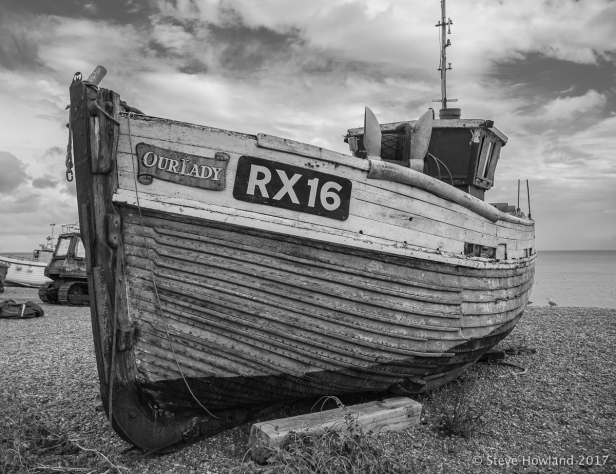 Faced with the comment “If you think I’m going out there you’re mistaken” I overrode my instinct of remaining in comfort and decided to brave the world, leaving the car and heading over towards some boats I could see in the distance. It was hard work trudging through the heavy shingle that the area is famous for.

To my delight it was indeed a photographer’s paradise of subject matter.

To the untrained eye this place was a complete junkyard of discarded fishing gear, abandoned winches, and decrepit huts and containers – to me it was a rich source of images.

A simple old rusty container stood in stark contrast to the big sky.. 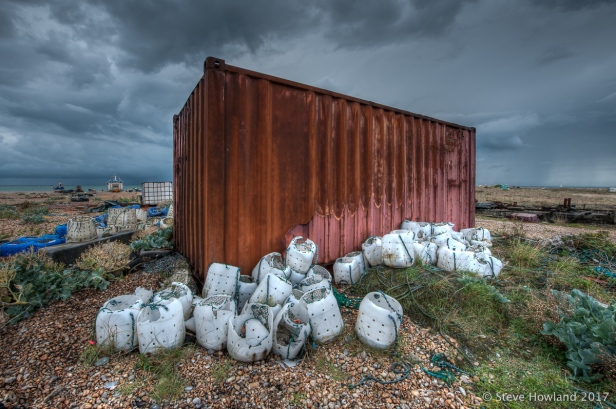 And occasional bungalows dotted the landscape as if they’d been dropped there after a tornado, fishermen’s cottages? Accommodation for visiting sea anglers?

This section of the Kent coast is just shingle. No harbours. So fishing boats in Kent are dragged onto the shingle by winches and bulldozers that sit around looking abandoned. 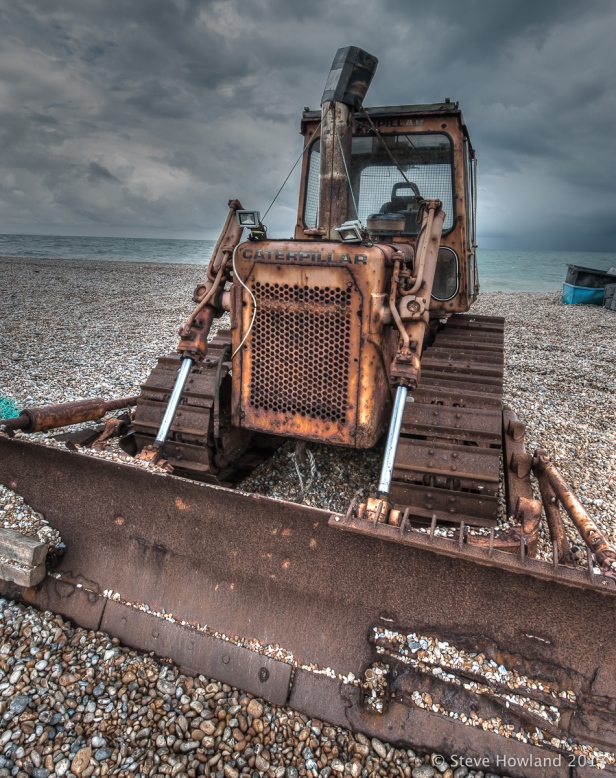 It is desolate and almost ghostly. No people. Only the evidence of their boats, their nets, ropes, fish totes simply abandoned.

I had to include both versions of this shot. One with the impact of the colours but the mono version too because it lends itself to a strong black and white treatment.

It was time to struggle through the shingle all the way back to the car which was out of view and a good distance away. Behind me now the black sky and ahead the monolithic structure of the nuclear power station.

“Well, was it worth it? Was there anything to see out there?” Oh yes.