I claimed that I was happy to just chill in Tenerife and leave all my heavy camera equipment behind for once – and if (no, when) I saw a photo opportunity I would face the challenge and work within the constraints of my iPhone.

And that was true until I found myself in a party of eight heading up the steep road to El Teide as the sun set over the island of La Gomera out at sea.  We had driven through and risen above a thin cloud bank heading for an eventual altitude of 7000ft to observe the stars through telescopes.  Had I thought about it before flying out I may have included my Nikon D700, a travel tripod and some warmer clothing.

We stopped (with perfect timing by our guide from Teide by Night) to watch the sun set over the bank of cloud and the distant island.  My Nikon would have been firing off shots, at different settings, different zoom levels, bracketing exposures, coping with the challenging lighting. Instead it was out with the iPhone and see what can be achieved.

As soon as we walked to the hillside viewpoint I saw the couple sat, absorbed in the view, knowing this was a shot that must be taken at once before they moved.

They made such a wonderful silhouette.  It was a case of ensuring that the sun itself was masked by their bodies and that the focus was clearly on them, so that any fine tuning could be achieved on the raw file in Lightroom Mobile. (Having said that, the small lens and sensor in an iPhone almost guarantees focus with a deep depth of field.) I showed them the picture and I repeated it for them on their own camera.

As the sun touched the rim of the distant island I managed to get this difficult shot. The lens flare was terrible and the tree bank glow was lost in silhouette but here the advantage of being able to capture the image as a raw DNG proved its worth. I was able to lose some of the flare and lighten the exposure of the foreground in Lightroom.

Turning around to face the other way after the sun had dipped below the horizon revealed that the volcano of Teide was high enough to be still in full view of the sun, giving it an unnatural red glow against the jagged close foreground of dark lava formations. The light was going very fast and it was almost impossible to hold the iPhone steady enough to prevent blur – had there been a post, a pillar, something to steady against…  hence the lack of sharpness in this shot. However, the lack of clarity is compensated by the magical view that evokes someting taken by a NASA rover on Mars. 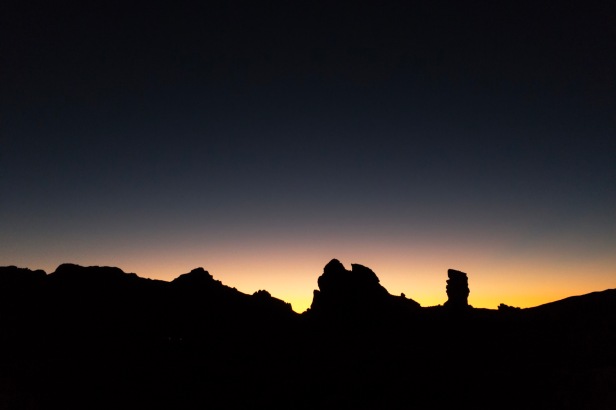 As we approached our area for the stargazing experience I saw this last glow of light creating a wonderful silhouette against the lava flows. It took a couple of attempts using different settings on the iPhone to get the right light balance and a shutter speed that would allow me to hand hold and make the horizon edge sharp enough.

Once the light had truly gone my photography was over (or so I thought) and we were able to start viewing the stars through the hefty reflector telescopes set up for our use. They had cameras connected too and I was wishing I could have attached my Nikon. Planets, stars, star fields, galaxies and nebulae were shown to us, and we were enthralled – our only disappointment being the presence of a high gibbous moon that cast such a light as to wash out many of the stars and the ribbon of the Milky Way.  On the other hand, we were able to study the moon in close up and despite the lack of a DSLR a quick but difficult presentation of the iPhone to the telescope revealed an amazing shot of the moon, which turned out to be sharp despite shivering with the intense cold at 7000 feet. So thanks to the people at ‘Teide By Night‘ for that.

Down on the beach, under the pier at Cromer this summer.
I’m currently reworking some old shots from a US and Central America trip in 2008 and this is the first - Old San Juan in Puerto Rico. I was struck by the lamps catching the light set against a brooding sky.
Random Pick Of The Day. A WWII historical re-enactor at Fort Paull museum near Hull (now sadly closed) on a rainy day in 2016.
It’s dull and drizzly here today so perhaps appropriate to bring out this recent reworking of a wet and misty shot from Perugia, Italy in 2012. Edited in Photoshop and the Nik Collection.
Winchester Cathedral. The transept is a wonderful example of Norman architecture within a primarily Gothic church.
Shades of Green.
Another moody view of the formal gardens at the National Trust’s Sizergh Castle in Cumbria last month.
During a recent bike ride, the evening sun was falling on the Lychgate at Hotham church.