How can it be that despite all my travelling I’ve never been to Birmingham.  Well that’s fake news if I think about it – but a company training course decades ago that never left the hotel hardly counts.  This trip in late March, however, was an overnighter after a visit to the Photography Show at the NEC  – a day of lusting over cameras and equipment and everything photographic, a day that saved me a lot of cash. By not buying. Not this time anyway. So my 9yr old Nikon D700 lives to see another year. That’s a 14 megapixel camera by the way. Less than some phones. It ain’t necessarily all about how many pixels, but about the quality of the pixels and if you intend to print a mural or not. Just sayin’.

So the next day was an opportunity to explore the centre of the town, a stroll around with the camera and see what took my eye. 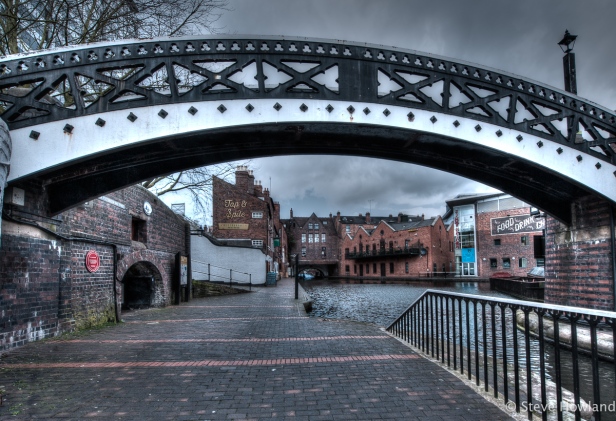 These are taken around the Birmingham Canal which, like many such inner city areas, has been developed into a canal path with eateries and bars at various points, especially around Brindley Place.

The reflection of the Hyatt Hotel in the water attracted my eye but was unremarkable at first.  So in the ‘darkroom’ I desaturated the top and bottom and emphasised the height by cropping hard.

The bridge under Broad Street was also an initial disappointment. My HDR version (that blended the difficult light and shade) looked weak so I pushed it to the extreme opposite of contrasting black and white to produce this almost ‘sketchy’ image. 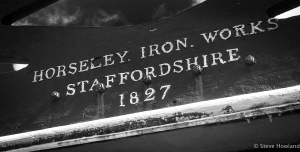 Now when you think of canals and locks it doesn’t usually conjure up this image. Not quite the Pont des Arts, known as the ‘Love-Lock Bridge’ in Paris but Brummie couples seem to have taken on the same habit of attaching padlocks to the Salvage Turn Bridge as a declaration of their love. Hidden from view, no doubt, is a metal mountain of keys under the water since the tradition is to throw the key into the river.  And apparently –

Ah… yes, the romantic canal cities of Venice and…Birmingham??  Not usually said in the same sentence but then this was from Birmingham’s own marketing people. 😉

Moving down Broad Street to Centenary Square brings us to some modern architecture.  Firstly the glass walled Symphony Hall which presented some interesting angles for my 14mm very wide lens.

I’m not sure how much I like this next one, but this lens allowed me to capture a symmetrical reflection, taken inches from the Symphony Hall windows. It just had to be done.

At the other side of the road I could see the Boulton, Watt and Murdoch Statue glinting in the sunlight. The sun was behind it making it a challenging shot but that only served to enhance it.  The gilt seemed to stand out making a great colour shot. But equally, the lighting leant itself to a black and white treatment – compare below. 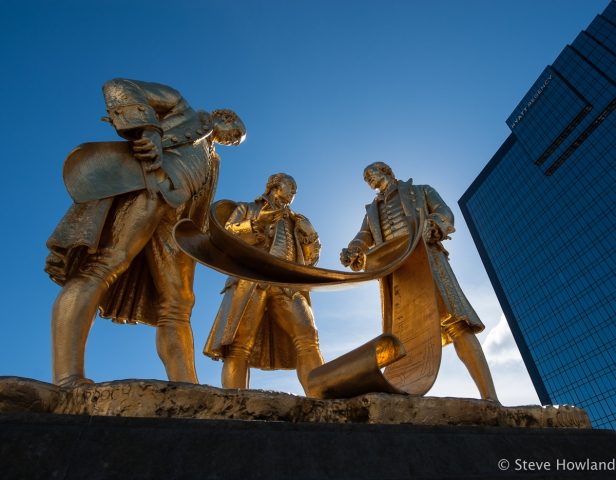 From traditional art to contemporary – and controversial.  Here, ‘A Real Birmingham Family’ by Turner Prize winning artist Gillian Wearing is shown against the £189 million Birmingham Library. 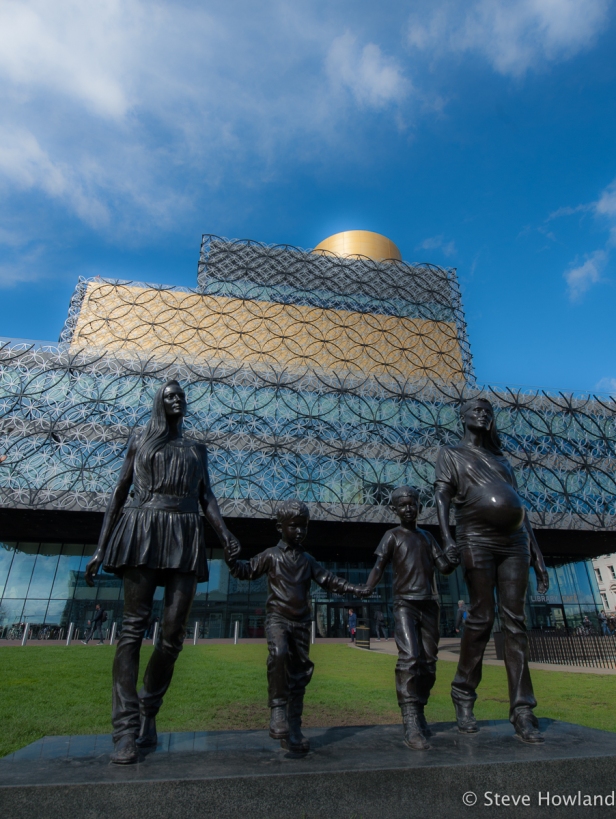 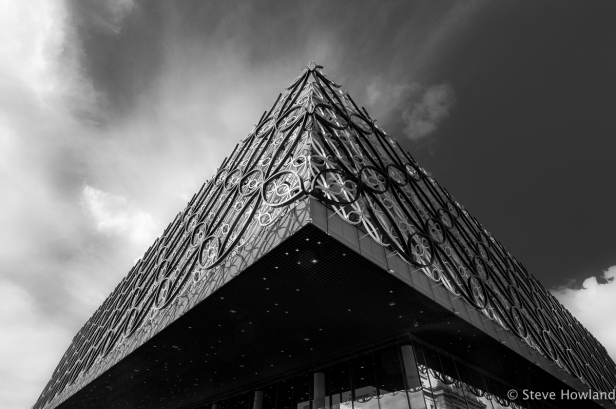 Love it or hate it, it makes for some great architectural photography and I would have explored more angles from outside and inside if I hadn’t found it prudent to comply with marital advisement that standing around for an hour in the cold holding my spare lenses was never a part of our original contract. 😉

By now one of those canal side venues was enticing us to go eat before driving back to Hull. So here’s the final shot for today.  No it’s not night time. The harsh glass front and deep blue sky in this view of the ICC building lent itself to a severe monochrome treatment.

3 thoughts on “Bits of Birmingham”